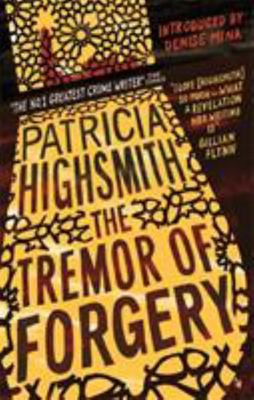 The Tremor of Forgery

Howard Ingham finds it strange that no one has written to him since he arrived in Tunisia - neither the film director that he is supposed to be meeting in Tunis, nor his lover in New York who is, he hopes, missing him. While he waits around at a beach resort, unable to progress on the film script he is there to write, he starts work on a new novel, about a man living an amoral double life. Howard also befriends a fellow American who has a taste for Scotch and a suspicious interest in the Soviet Union, and a Dane who appears to distrust Arabs intensely. When bad news finally arrives from home, Howard thinks he may as well stay and continue writing, despite the tremors in the air of violence, tensions and ambiguous morals.

I love [Highsmith] so much ... what a revelation her writing is -- Gillian Flynn Wall Street Journal Highsmith is the poet of apprehension rather than fear ... Highsmith's finest novel to my mind is The Tremor of Forgery, and if I were asked what it is about I would reply, "apprehension"' -- Graham Greene One of her best books ... She creates a lot of dread and a lot of apprehension very casually -- Jonathan Lethem Chicago Tribune One of Highsmith's finest novels New York Times

Patricia Highsmith (1921-1995) was born in Fort Worth, Texas, and moved to New York when she was six, where she attended the Julia Richman High School and Barnard College. In her senior year she edited the college magazine, having decided at the age of sixteen to become a writer. Her first novel, Strangers on a Train, was made into a classic film by Alfred Hitchcock in 1951. The Talented Mr Ripley, published in 1955, introduced the fascinating anti-hero Tom Ripley, and was made into an Oscar-winning film in 1999 by Anthony Minghella. Graham Greene called Patricia Highsmith 'the poet of apprehension', saying that she 'created a world of her own - a world claustrophobic and irrational which we enter each time with a sense of personal danger' and The Times named her no.1 in their list of the greatest ever crime writers. Patricia Highsmith died in Locarno, Switzerland, in February 1995. Her last novel, Small g: A Summer Idyll, was published posthumously, the same year.