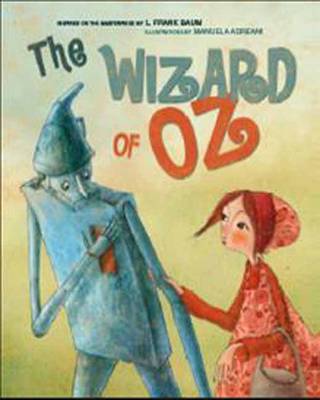 The Wizard of Oz

The first edition of 'The Wizard of Oz', Lyman Frank Baum's masterpiece, was published in 1900. Since then, generations of young readers have followed little Dorothy and her dog Toto on their intrepid journey through the wonderful world of Oz, into which the girl is thrown by a tornado. Along the way, Dorothy makes some odd friends who help her tackle dangers and adversity: the Scarecrow, the Tin Man and the Cowardly Lion, characters who, along with the Wicked Witch of the West, the winged monkeys and the powerful and mysterious Oz, have become icons of our collective imagination. The incredible success of this work has inspired new stories for children set in the world of Oz, musicals and numerous movie adaptations, of which the 1933 version, starring Judy Garland, stands out.

This book, an adaptation of the original text, is enhanced by stunning illustrations by Manuela Adreani, an artist of rare sensitivity capable of recreating the imaginary kingdom of the great and terrible wizard Oz with her drawings, and of conveying the magic of a story that has become a timeless classic.

Manuela Adreani was born in Rome and currently lives in Turin. After receiving her high school degree with specialization in illustration, she worked as a graphic designer before moving to the world of animation. After winning a scholarship for a Masters in Animation at the IED in Turin, she worked for Studio Lastrego e Testa on the TV series "Le avventure di Aladino" and "Amita della Giungla," produced and broadcast by RAI, and on the short feature "La Creazione," produced for the book of the same title by Carlo Fruttero. In 2011, she commenced her career as a freelance illustrator, collaborating with Benchmarck and Scholastic India. She is among the winners of the illustration competition commemorating the 130th anniversary of Pinocchio's creation.