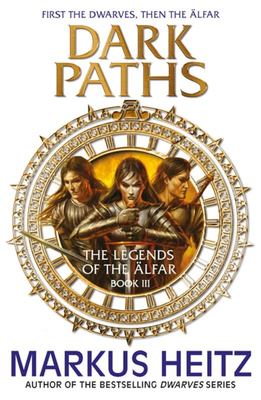 Dark Paths (#3 Legends of the Alfar)

There are four races: the Elves, the Dwarves and the Humans and the lfar. The other three all know the lfar to be dark, relentless warriors, set on conquest; they have been deadly enemies since time immemorial. But are things about to change? The young lfar triplets Sisaroth, Tirigon and Fir sha have been banished to the deadly underground realm of Phondras n, two of them exiled for a murder they did not commit, the third determined to stay with them, to help them survive this terrifying place full of monsters. Then Sisaroth meets a dwarf, Tungdil, who has been locked up in the Dark Abyss (Tungdil will be well-known to readers of the Dwarves series!) - and their unexpected relationship will change the fate of the lfar and the dwarves - for ever.

Markus Heitz was born in 1971; he studied history and German language and literature. His debut novel Schatten ber Ulldart (the first in a series of epic fantasy novels) won the Deutscher Phantastik Preis (German Fantasy Award) in 2003. His bestselling Dwarves trilogy has earned him a place among Germany's most successful fantasy authors. He currently lives in Zweibr cken, Germany.