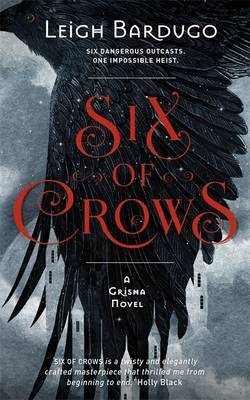 Game of Thrones meets Ocean's Eleven in this brand new fantasy epic from the #1 New York Timesbestselling author of Shadow and Bone, Siege and Storm and Ruin and Rising, Leigh Bardugo. As gripping, sweeping and memorable as the Grisha trilogy, Six of Crows will be perfect for fans of George R. R. Martin, Laini Taylor and Kristin Cashore, and will take Leigh's fans back into the world they know and love. Criminal prodigy Kaz Brekker is offered a chance at a deadly heist that could make him rich beyond his wildest dreams - but he can't pull it off alone. A convict with a thirst for revenge. A sharpshooter who can't walk away from a wager. A runaway with a privileged past. A spy known as the Wraith. A Heartrender using her magic to survive the slums. A thief with a gift for unlikely escapes. Six dangerous outcasts. One impossible heist. Kaz's crew is the only thing that might stand between the world and destruction - if they don't kill each other first.

A new fantasy epic set in the world of the Grisha from the NEW YORK TIMES bestselling author of SHADOW AND BONE, SIEGE AND STORM and RUIN AND RISING, Leigh Bardugo.

a fitting and brilliantly crafted conclusion to the Grisha trilogy, one that fans will be sighing over happily for years to come Spec on Spec Fic

Leigh Bardugo was born in Jerusalem, raised in Los Angeles and graduated from Yale University. She has written for 20th Century Fox and the L.A. WEEKLY, and SHADOW AND BONE was her first novel. SHADOW AND BONE and its two sequels, SIEGE AND STORM and RUIN AND RISING, have made Leigh one of the most acclaimed authors of YA working today. Find her website at http://www.leighbardugo.com/ and follow her on Twitter @lbardugo